I am proud as punch to announce that after fourteen years of on/off work "Stick It To 'Em!" is finally available on amazon! It is a brash high balling adventure romp, not for minors or those with a delicate disposition!

Here are some photos to illusratate the physical size of the book, a hefty 8.5"x11". I have no plans of converting it to an ebook as I'm not confident with the results at present. The printed version is a lovely object 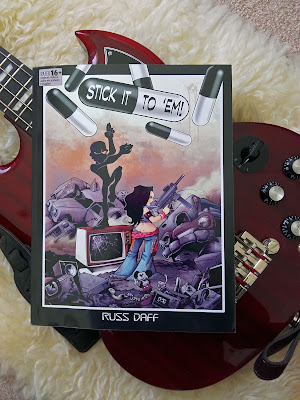 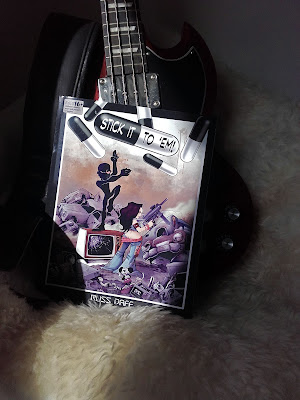 Here is an interior spread. 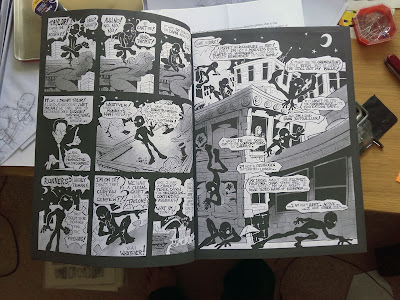 Here is the official blurb...

Newtown... This metropolis is the shining beacon of the totalitarian regime known as the “Organisation”, callous administrators who impose their will on a human ant heap. Citizens exist in a perpetual state of drug saturated servitude.

But Newtown is a dystopian enclave amidst a desolate waste ground. Those who exist within it know nothing of what lies beyond...

Taylor, the protagonist... Hero? Anti-hero? Villain?! He is the lapdog of this cruel regime but is given a tantalising mission. Go beyond the walls of “Organisation” control and hunt down a high ranking defector.

What awaits the hunter out there in the junk yard of the past?

Stick It To'Em! is a near future roller coaster ride not for the faint hearted! Can you handle it?
Posted by Russ at 04:14 No comments:

Biro Doodles From The Distant Fog!

As work on "Stick It To 'Em!" is heading ever closer to the finish line I thought it would be good to show some sketches and character designs from my sketchbooks from way back in 2004-2005.

Let's start with Taylor, the anti hero protagonist of the story.

This first sketch is where it all started. At this point the style I was using was more comic book, still very stylised but less cartoony than what it evolved into. A clear influence of "Danger: Diabolik", the Mario Bava classic is obvious in this pose and depiction of Taylor. 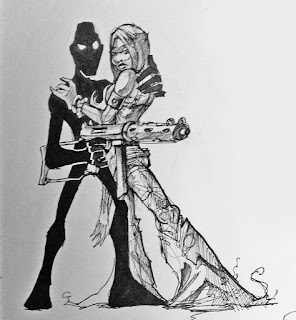 Within a few weeks of manic late night doodling I jumped from that to a more cartoon style that seemed to reflect the zany, campy and anarchic journey that is "Stick It To 'Em!" The spread below illustrates this change in artistic direction. 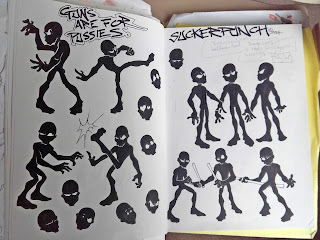 Here is Taylor as he appears in the book with his uncompromising side kick, Gretchen!
What a lovely couple they make! 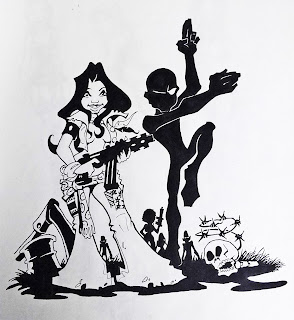 AH, Gretchen! She has to be one of my favourite characters. She is a joy to draw and her sass and volatility in the story kept me on my toes.She is a curvy, gun toting rebel in bell bottoms, who has been wronged and out for revenge... What's not to like?!

As I was writing and drawing up the pages I couldn't wait for her to make her entrance. As I patiently waited for her time to shine, I filled many a page in my sketchbook with Gretchen in as many poses as I could. If I saw a good pose on a google search I would quickly render her in it.

Here is how she evolved... 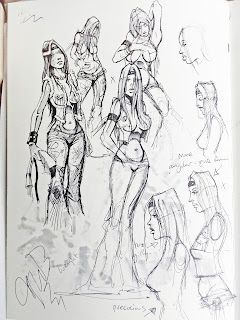 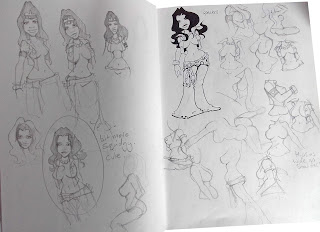 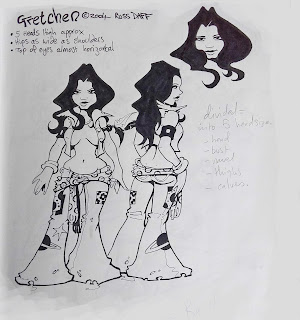 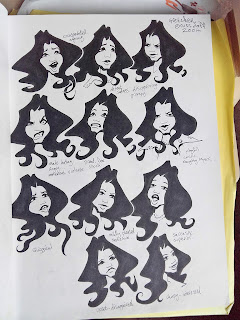 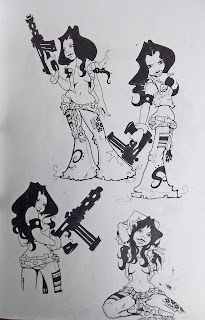 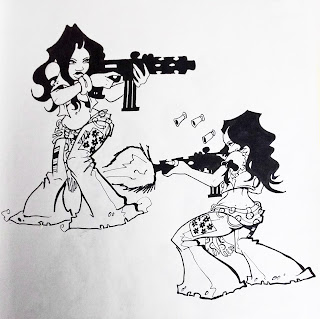 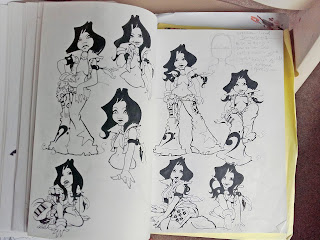 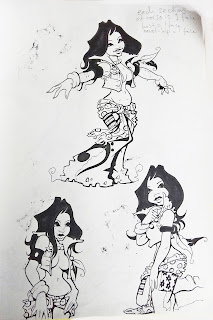 I wanted Gretchen to be a total force of nature. A ridiculously over the top vamp but with a softer, childlike quality that comes through as her journey progresses. In the story she is banished from her gang and seeks deadly vengeance.

Her design is purposely provocative but she is no pin-up girl!
Posted by Russ at 03:24 No comments:

Even though the book itself isn't quite ready for release I thought I'd show the cover design. 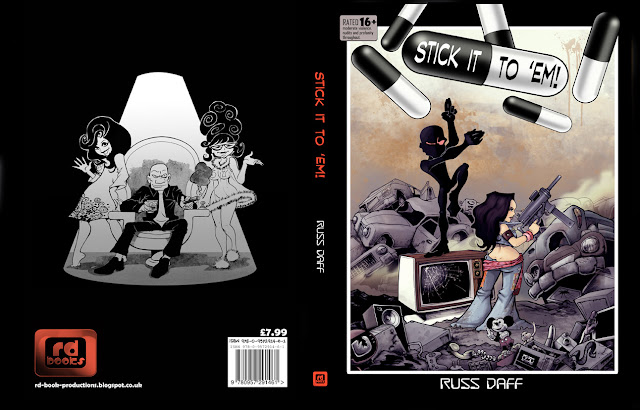 STICKIN' IT TO YA! 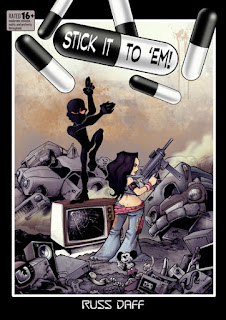 “Stick It To 'Em!” formerly “Suckerpunch”, a book that lay unfinished for a decade is almost ready for release. This is the story behind the motivation and design processes that got it done...Finally!

Be advised, unlike most books I produce this definately is not a book for children!

It's fair to say that back in 2004 I was totally immersed in anything and everything kitsch and retro from the late sixties to the mid/late seventies. I still do but it has taken a bit of a back seat to modern living (whatever that means!!) I just loved that whole vibe. The films, fashion, music and art from this period was like my catnip. I could not get enough! I got to the point where I actually wanted to be Starsky! But I live in Cambridge, England and was then starting a new career as a fledgling freelance illustrator instead! 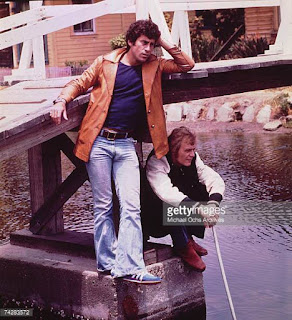 I would seek out and purchase endless DVDs of films and TV shows from my very early childhood and then whilst searching for those I would be distracted by another, lesser known film or show. Like Alice tumbling through an endless rabbit hole I indulged. B-movies made way for schlock movies. Some were great fun some were absolutely awful, but I didn't care I was in a groove and all these images and sounds were feeding my creative “id”!

Looking back I think the biggest influences that leaked into "Stick It To 'Em!" were, in no particular order:


Jack Hill films (predominantly “The Big Doll House” and “Switchblade Sisters” and a smattering of “Coffy” and “Foxy Brown”. Pam Grier bewitched me during this period. 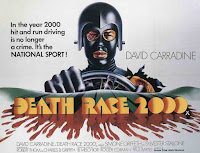 “VanishingPoint” .You gotta love the 1970 Dodge Challenger R/T and Barry Newman is just the personification of cool in it! 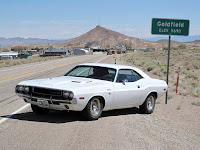 “Danger: Diabolik” and “Five Dolls For An August Moon”. I absolutely love Mario Bava movies. His superb compositions and lighting! 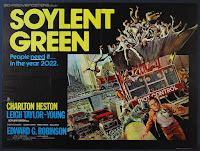 Looking back at my sketchbooks of this period shows vividly how all this was being computed. These Biro sketches needed to be channelled somehow, figures became characters and quite quickly “Suckerpunch” started to take shape.

I wanted to write and draw a slightly anarchic comic book, not a polished super hero yarn but a gritty, off the cuff effort! I wanted it to rattle along like a Ralph Bakshi cartoon not a slick Hollywood remake. My aim wasn't for perfection, the drawings weren't stifled by endless corrections, instead I opted for the Chinese cooking approach. If it takes more than five minutes then it's ruined!


No Photoshop either just marker pens and Bristol board for this opus! My commercial illustration work was already digital at this point but I wanted to go back in time and get my hands dirty. A quandary I still wrestle with today but for some reason the Wacom tablet always seems to win!

I wanted to encapsulate as many of these influences as I could in one roller coaster ride of a story. I knew that I wanted a dystopian city scape inhabited by chemically subdued citizens ruled by a malevolent super class of administrators. An anti hero who is sent out side of this city in search of an escaped official who seeks to start a revolution with the help of mysterious denizens of this wild land, abandoned and forgotten for so long. I wanted gun toting harridans, man eating beatniks and new-age cults. All with a backdrop of the decaying remnants of twentieth century consumerism and it's glorious analogue technology...


It was an exercise in unrestrained creativity and to a large degree uncensored in it's rendering. I went with it, not trying to please anyone but myself as I drew and drew and drew! There is a generous peppering of bad language and innuendo but nothing too shocking. It is a red blooded romp for sure, unapologetically so!

I beavered a way, every spare moment I dedicated to thgis project. I published  a weekly section on Myspace for a while. I managed a colossal 140-ish pages before fatigue set in. I had more commitments from my paying work and the rta race was gripping me ever tighter.  Progress slowed until it eventually ground to a halt. It stagnated and was put in a box for nearly ten years!

In 2015 I moved house and whist packing and unpacking I sat and re-read what I had done. I fell back in love with the characters, the story and the style. "I should finish this!  Even if no one wants to read it at least give it a chance." I thought to myself. Again, it has been a slow process as I do have a lot of other commitments. Drawing is my job and my passion and if someone is paying me for artwork then that has to come before my personal projects no matter how desperate I am to finish them and get them out there!

So as I write this "Suckerpunch" has changed to "Stick It To 'Em!" and will be released before the end of 2017. Along time coming but hopefully worth all the toil and trouble!

In upcoming posts I will show how the look of "Suckerpunch" developed and changed drastically over a very short period back in 2004. 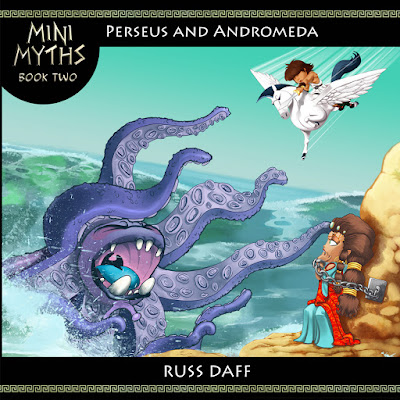 The second publication by RD Books is available now to buy on amazon!!

RD Books is proud to announce the publication of it's second book!

Mini myths Book Two: Perseus and Andromeda has gone through the proofing stage and thankfully come out the other end intact! WOOHOO!

Here is the descriptive blurb...

"In the second adventure of the Mini Myths series Perseus has slain the dreaded Medusa and now must return home in time to save his mother from a tyranical King.

Meanwhile the Kingdom of Joppa is ruthlessly punished by the cruel Sea God, Poseidon. Princess Andromeda must be sacrificed to a gruesome monster to save the Kingdom from total destruction!"


Here's a few pics of the proof copy! 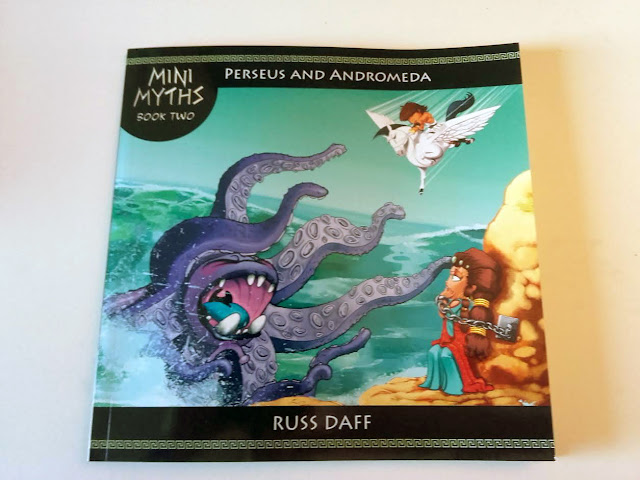 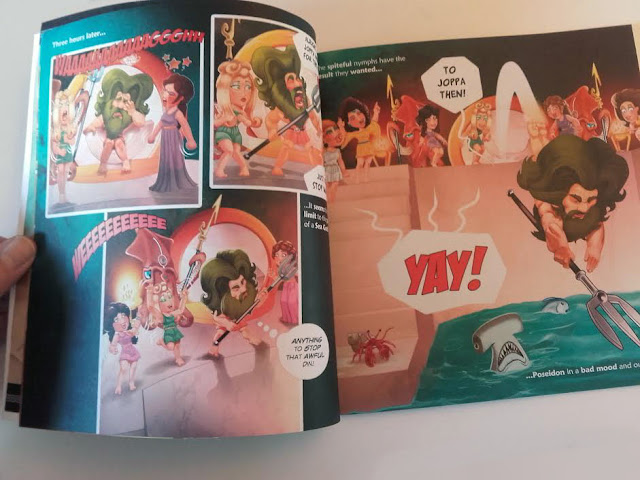 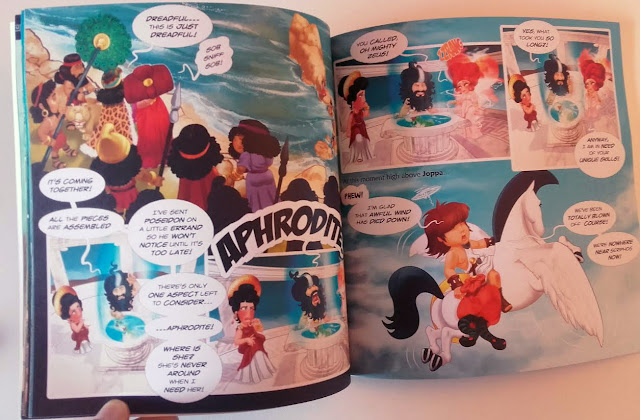 It will be joining Book One on amazon any day now!
Posted by Russ at 06:59 No comments:

So, WHO/WHAT THE HECK IS RD BOOKS?!

Well, it is the imprint name for all of the comic books created and published by Russ Daff (me).

I have already published the first book in my Mini Myths series and have a blog dedicated to this series the mini myths blog , but I have many other projects that are in the pipeline so I thought why not have a blog that deals with them all. Most publications will be children's comic books but some will be aimed at older readers.

Click on the "available books" tab at the top of the page if you wish to purchase a book.

These are the products that are comin' atcha in the short term... 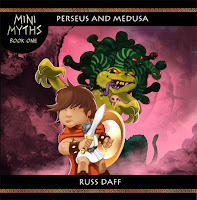 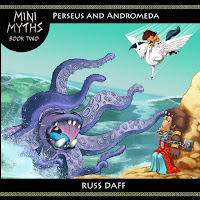 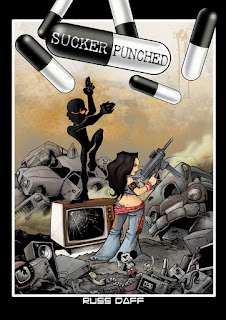